A Glance at ‘Shoulds’ and ‘Shouldn’ts’ of IAA in Iran

Why Spanish companies should consider Iran 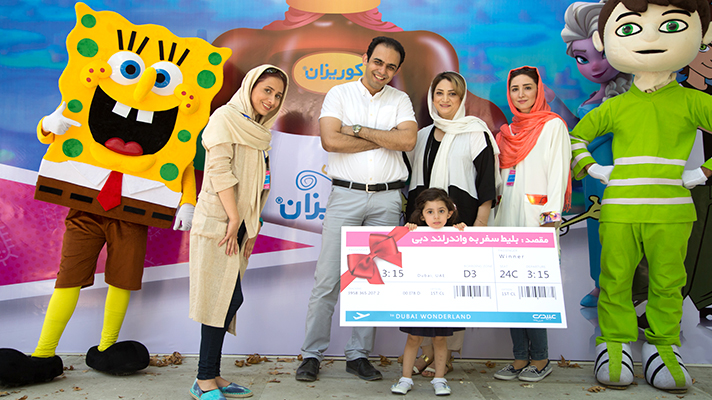 Children Corizan Super Hero Off to Save Children

As soon as you stepped in Aryana Gallery Garden the sound of music plus children’s excitement and enjoyment gave you a good feeling. On Friday August 12th, Dr. Abidi Pharmaceutical Company celebrated the end of Children Corizan brand digital campaign at the mentioned gallery garden.

Dr. Abidi Pharmaceutical Company has recently launched a campaign in virtual space to introduce Children Corizan acetaminophen syrup and connect better with the audience through the product. A contest was also held at the end of which three tickets to Dubai’s Wonderland were handed to the winners.

The publicity event was so attractive that prompted dnaunion to send a reporter to file a field report about the ceremony.

The report includes interviews with Nazanin Rezaei, Dr. Abidi Pharmaceutical Company’s director for colds products as well as two campaign organizers from Magnolia Advertising Agency. Some of the participants in the event have also expressed their views.

Ms. Rezaei who is in charge of cold medicines of Dr. Abidi Pharmaceutical Company commenting on the company’s recent campaign, says: “Dr. Abidi Company has launched the digital campaign with an aim to promote one of its products called ‘Children Corizan’ (acetaminophen syrup for kids).”

She added: “The audience of this product has no good relationship with the medicine due to their age. Therefore, we needed to find a creative and different way to forge a good relationship with them. The marketing group of the company decided to design a mascot for the product in order to connect to the audience. When kids face the real mascot of the product they would find a better feeling about the medicine and adopt a friendly approach. The campaign provided a good opportunity to promote other products of the company as well.”

On the mascot of the brand, she said it looks like a superhero with strong arms who would save kids from illness. The mascot tells kids that he can cure them because he is a superhero.”

As for the target market, she said: “Before launching the campaign the mascot’s mock-ups were put on display at pharmacies throughout the country so that the audience would gradually get familiar with it. In addition to mock-ups, stands and brochures were also prepared and sent to pharmacies. After the audience got acquainted with the character to some extent a contest was held on social networks with the participation of the character. More than 15,000 people participated in the contest and after lottery some of them were invited to attend the closing ceremony of the campaign. A second contest was held at the closing ceremony where three winners received the special prize of the event.

Rezaei concluded by saying that the cold syrups of Dr. Abidi are well known products and this year the company decided to launch wider publicity because of its branding.

Children Corizan Super Hero Off to Save Children

Behzad Mohammad Rahimi Assad, the project’s creative manager at Magnolia Advertising Agency commenting on the recent Children Corizan brand campaign says: “Children don’t like to take medicine and this has become a major issue in families. We were looking for some creative ways to encourage kids take the acetaminophen syrup made by Dr. Abidi Company without a fight. Making a hero in children’s mind was one of the best solutions at hand. We tried to turn the medicine in question into a hero in the kids’ minds: a superman who wanted to save the children. To accomplish this, we sought assistance from the kids themselves. We asked them to introduce their super heroes. After deciding the most favorite super heroes we placed them alongside the Children Corizan super hero which had been designed as a strong character and asked the kids to take photos with him at the closing ceremony. In this way, the kids got acquainted with the Children Corizan mascot and considered him as their savior hero.”

Rahimi added: “The Children Corizan mascot had been designed before launching the digital campaign with an aim to forge an easy interaction with the kids and inspire them with a sense of heroism. The Children Corizan mascot looks similar to the acetaminophen syrup bottle so that the kids would easily feel the connection when they see the medicine. We used publicity media such as Instagram, Telegram and SMS to fulfill the campaign. The audiences were informed about the closing ceremony and its related programs through advertisements in various media outlets and began participating in the campaign. The feedback was great and it will certainly affect sales.”

When asked about the reason for choosing the digital media for the Children Corizan campaign, Rahimi responded: “The main customers of Children Corizan acetaminophen, namely mothers, maintain an active presence in digital space and spend a lot of time with their cell phones. Moreover, the advertisement cost in these media is lower than the print media.”

Pouya Sabbagh, Account Executive at Magnolia Advertising Agency, commenting on the Children Corizan brand campaign, says: “Magnolia has launched a digital campaign to promote Dr. Abidi’s acetaminophen syrup for kids and held a contest mainly through the digital media. We asked mothers to tell us through different ways who were their kids’ super heroes. Some 15,000 people participated in the contest. At the end 50 kids were selected through lottery and were invited to attend the closing ceremony together with their parents. It was a happy time for all, especially for the kids. A second lottery picked three kids as the final winners of a journey to the Wonderland in Dubai.”

According to Sabbagh the main platform of the campaign was digital because they were confident that they could find kids’ mothers in the virtual space and attract their attention to the contest. He said media connection too was easy because they established direct contacts with the audience.”

What the Participants Thought?

We also asked for the opinions of some participants in the event. The following two categories reflect their points of view:

Audience 1: Commenting on the reason for their presence at the closing ceremony of Children Corizan campaign: I found about the event through Telegram and found it attractive. I sent my daughter’s cartoon hero to the campaign and thus attended the celebration. I think the mascot designed for acetaminophen syrup was interesting. My daughter was thrilled to have attended the festival and keeps talking about the event.

Audience 2: Sponge Bob was my son’s hero. I learned about the Children Corizan brand contest via Telegram and introduced the hero. When my son realized that he could take a photo with his hero he became so excited. I am sure he will remember this experience till the end of his life. I came to know the Children Corizan hero before the festival and the related contest. I had seen the Children Corizan mascot at a pharmacy and found the idea to be interesting.