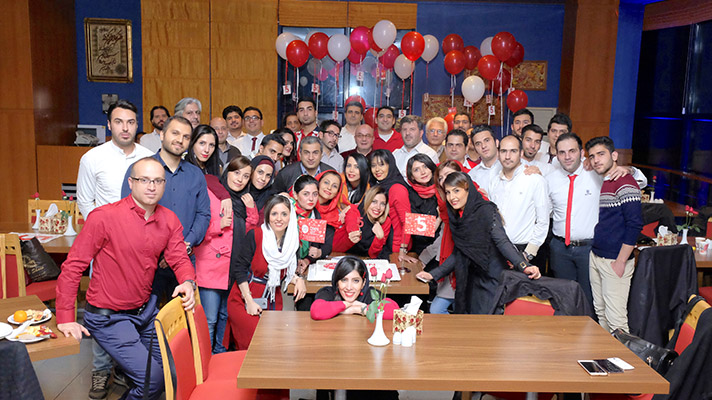 A ceremony was held at the evening on Monday, 18 January to mark the fifth birthday of DMN, one of the most professional companies in dnaunion group. DMN entered into the fifth year of its operation on December 26 but the presence of Murat Hakan, one of the founders of the company, to lecture at the BTL training course prompted them to celebrate the event a few days later.

The ceremony was held in a small but luxury restaurant in which one of the founders of DMN, Murat Hakan, and a number of directors of dnaunion were present.

Upon entering into the restaurant, everything was red and white. The staff of the company each had one of the colors of the company’s logo in their dress. Red and white balloons were moving around in the air. A number of balloons were waiting on a table for their owners to come and pick them. The thread of the balloons was fastened to a small gift over which the names of their owners had been written and beside them bunches of narcissus were lying down on the table with their scent filling the air.

You had a nice view of Tehran from the tall window glasses of the restaurant and the DMN staff were happy chatting, smiling, clapping, taking photos and making memories.

When the birthday cake arrived everyone was clapping and making a wish.

Setareh Alirezaeifar (Director of the Protocol Department) and Pooya Ghaznavi (Managing Director of DMN), in the middle of taking pictures were careful to make sure that everybody was having a pleasant time and happy. The foods, the cookies and the fruits had been picked with special obsession. Music, after the red and white logo, was the main player of the scene.

Alirezaeifar who has been working with the company for the past three years says she considers the birthday of DMN and its relevant developments belong to herself. During her years of cooperation with the company she has witnessed the growth of DMN and was very happy and confident that more successful days were ahead.

Two weeks prior to the ceremony Sara Ahmadi spent great energy and time together with Setareh Alirezaeifar and one of the staff of the company for holding the event. She says: “First of all it was expected to be held on the morning of December 26. We wanted that the balloons and gifts surprise the staff upon their arrival but the coincidence of the training course which had been prepared for DMN as well as presence of Mr. Murat Hakan in Iran provided a good opportunity to take advantage of his presence and finally the date and style of holding the ceremony changed to some extent.”

Shamim Hosseini considers the feeling of being surprised when faced with the atmosphere of the restaurant and arrangement of the balloons wandering about in the air interesting. In her point of view the event has a great effect on the happiness of her colleagues and in strengthening their spirit of team work.