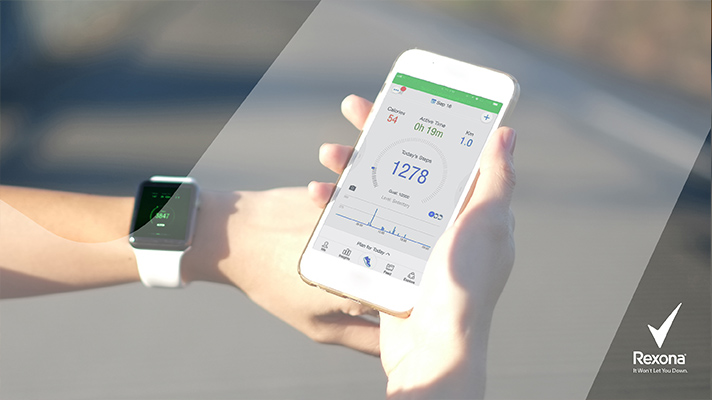 Have you ever noticed the number of steps you take during the day? Steps the more you take the closer you get to health. Rexona brand in its recent campaign has urged the audience to take more steps and pay particular attention to the number of steps they take from now on. The “Rexona Step” Digital Campaign was ideated by Magnolia Advertising Agency and Unilever Iran Marketing Team and implemented by Magnolia Agency. To shed more light on the campaign, we interviewed Magnolia Advertising Agency’s Marjan Volvi, Rexona Brand and Campaign Executive Team Manager.

Q. What is the aim of Rexona brand in running campaigns like Rexona Step to motivate audiences to be dynamic?

The goal of the Rexona brand in recent years has been to create more mobility in the people of the world. This brand focuses on the major issue of the dramatic drop in the amount of movement in the lives of today’s human beings trying to raise awareness about the harms of this phenomenon. Rexona’s patented MotionSense technology contains smart capsules that respond to body movement. As a result, the brand’s social goal is entirely in line with product technology and forms the core idea behind the “Rexona Step” campaign.

Q. Do you think Rexona will continue launching such campaigns?

The goals of the “Sustainable Living Plan” of Unilever brands like Rexona are generally long-term and are explored and studied accurately by consumer lifestyle around the world. Such campaigns will continue to promote brand and living quality for brand-conscious consumers, and will be developed to serve consumers.

Q. What about the campaign audience group?

The main target group of the Rexona brand is everyone between the ages of 18 and 55 who are concerned about protecting themselves from the unpleasant smell of sweat. In this campaign, target groups are people of this age range who have smart phones and think and respond to brand messages about the state of inertia of modern life due to the high use of technology. In this way, the brand is trying to make the mobile phone, which can be a major deterrent to more movement and activity, to have the opportunity to encourage people to move more, have a healthier life and live longer.

In the end, I should like to thank the efforts of Rana Mahmoud, deputy director of the Rexona brand in this project.

A Brief Tailored to Product Technology

Q. Would you please describe the first brief?

Magnolia Team: “The More You Move, The More You Live”. This is the main idea behind all the campaigns that Rexona designs and implements. Of course, this statement goes back to the nature and technology used in the Rexona product. In Rexona spray, the unique MotionSense technology has been used. In this technology, there are microcapsules placed on the skin after the use of the spray. These microcapsules are activated after the consumer’s mobility and spread their fragrances. Such a function also protects the skin of the consumer against sweating of the body.

Accordingly, Rexona intends to transfer its original message to the audience through a campaign in digital space: A message that brings the audience closer to Rexona. At the same time, the audience becomes familiar with MotionSense technology and its impact on their health and livelihood. So the main goal of the campaign is to transfer the brand name of Rexona and make a difference in the lives of the audience: An audience, which was supposed to be part of their daily agenda after the campaign.

Q. Tell us about the main idea of the campaign?

The main idea of the campaign was the brand message: The More You Move, The More You Live: A message that encouraged the brand to stimulate the audience. The brand has already encouraged audiences to engage in sports and mobility through various campaigns, and this should be better targeted at the new campaign: An idea that is not repetitive and is appealing to the Rexona audience. Given that we know that brand audiences are engaging with their mobile phone on a daily basis, we decided to use the same platform for the Rexona campaign. Based on this, we decided to encourage the audience to move and asked them to share the outcome with us. Of course, in line with this campaign, the brand has other promotional activities.

Seyyed Mohammad Mousavi, famous volleyball player was among those who contributed to the publication of the message. He put the photos tailored to the content of the campaign on his personal page and encouraged the audience to attend the campaign. In addition to that, the help of several Influencers was effective in delivering the message. We have tried to be very careful in our choice of the influencers. For us, the number of followers, visitors and the type of personality of the Influencers, and to what extent they are able to transmitting the message are important. In this campaign, a combination of influencers, professional athletes and non-athletes has been selected. This way of selection of the influencer is another message from Rexona.

Rexona says “It’s not necessary to be an athlete to use Rexona spray (to be active and dynamic). Even ordinary people sweat during daily exercise and need spray to protect their bodies.”

Q. What kind of substance was provided to the influencers?

The content was written by the executive team of the campaign and handed to the influencers in certain sessions. Of course, to provide the final content, we certainly used the views of the influencers. Content was tailored to the life of the influencers. So for each individual, the content was written separately, but with a link to the original message. The interesting thing about the campaign was that the influencers themselves produced videos based on their content. This mode of action had made the video messages more credible: A message that was not promotional and the audience connected with it. This practice led to a positive feedback from the audience.

Q. What about the competition planned for the campaign?

In the second phase, they were asked to increase their steps to ten thousand. Contrary to our expectation, the second phase was welcomed more than the first phase. Nearly two thousand people participated in various phases of the contest. In the meantime, the executive team was constantly in touch with the audience and they were guided at every stage. Our goal was to get the audience involved in the Rexona campaign message. After the apps installation, the audience became more sensitive about the number of steps and took more steps every day. The audience participating in the campaign was close to the age group targeted by the Rexona brand

Q. How did you pick the winners at the competition?

Q. In addition to the videos taken from the influencers other videos were posted during the campaign on the Rexona page. Tell us about that?

All published videos have documentary content and it was tried to keep them away from advertising nature. In these videos, the brand name was not too repetitive and did not bother the audience. In the videos, it was tried to portray a friendly and intimate atmosphere and forge unity among the audience. Of course, in content and video, we have tried not to go beyond the framework set by Rexona brand goals. This design of the campaign led some celebrities who were not invited in the campaign also publish messages and encourage the audience to attend the campaign. Therefore, the campaign message got viral spontaneously.

Q. Tell us about feedback from audiences?

The audiences had positive feedback on the campaign. It was interesting to note that there was no objection to the winners, and the audience considered themselves winners of the competition. They were happy to have taken the steps and regarded themselves winners. This is an important issue that we did not witness in previous competitions. In addition, after the competition was over we did not see many quitters on the Instagram page. Most audiences still follow the page and respond to messages. We will try to keep the Instagram page up to date with the brand-active goals.